What is squamous cell carcinoma (SCC)?

Squamous cell carcinoma result from the uncontrolled growth of cells called keratinocytes at the bottom of the epidermis (the outer layer of skin). Exposure to the sun’s UV rays is the biggest risk factor and SCCs often form in areas of sun-exposed skin. They are most commonly found on the rim of the ears,  the lower lip, the face, on the top of balding heads, and on the neck, hands, arms and legs. They may also occur  in other non-exposed areas including inside the mouth or on the genitals. 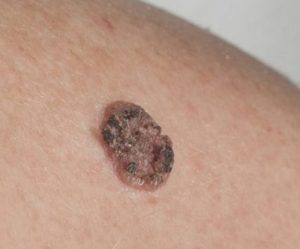 While they often appear later in life they are caused by the damage done by sunburn and/or long term exposure to sunlight as a child or young adult.

Squamous cell carcinomas can spread to other parts of the body (metastasise), but most are treated before this occurs. Less than 5% of SCC’s metastasize.

SCC’s are the second most common type of skin cancer in the UK. There are approximately 25,000 new cases of SCC each year, accounting for between 20-25% of all non-melanoma skin cancers. The vast majority BCCs.

There are a variety of treatment options available ranging from topical creams, photodynamic therapy and excisions to radiotherapy.

Squamous cell carcinomas often begin as small, raised lumps which are crusted and have a red or pink base. They most frequently develop on areas of sun-exposed skin such as the head, ears, lips, neck and back of the hands.

Over time, squamous cell carcinomas may enlarge and begin to look like a wart. They may also start to form ulcers and bleed. The ulcers tend to form in the centre of the tumour, with hard, raised edges.

If left untreated, SCCs can erode the surrounding skin. In the later stages they may also spread (metastasise) to other parts of the body via the body’s lymphatic system. Fortunately this is uncommon as most SCCs are treated before they spread.

Less than 5% of SCCs will metastasise. Larger tumours (i.e. those that are wider than 2cm in diameter and greater than 4mm in depth) are more likely to metastasise to other parts of the body.

Bowen’s disease is a condition thought to be a pre-cancerous form of SCC. It is sometimes called squamous cell carcinoma in situ. Bowen’s disease causes a red-brown, scaly patch on the skin. The patch may be itchy.

If left untreated, Bowen’s disease can progress into squamous cell carcinoma. This happens to about 1 in 20 people. Fortunately Bowen’s disease is easily treated with topical medication, surgery, cryotherapy or photodynamic therapy.

Solar (actinic) keratosis is where dry, scaly, thickened patches of skin (keratoses) form due to sun-damage that has accumulated over time. Actinic keratosis is not classified as a skin cancer, but can develop into a BCC or SCC over time.

The main cause of SCC is exposure to UV radiation in sunlight. UV-A and UV-B radiation can penetrate the skin and cause damage to the DNA of keratinocytes, causing them to grow and divide uncontrollably. This gives rise to tumours.

People with fairer skin that burns easily, red or blond hair, and green or blue eyes are at higher risk of developing SCC. This is because their skin contains less melanin – a pigment that safely absorbs and dissipates UV radiation.

Children’s skin is more easily damaged by the sun and so people with large amounts of exposure to sunlight in childhood are at a higher risk of developing SCC in adulthood. This is particularly true of individuals who have had severe or frequent sunburn and freckling as children.

The main risk factor for developing SCC is exposure to UV radiation from sunlight. People who work outdoors are at particular risk due to increased exposure to sunlight. Using sunbeds, which emit UV radiation, also increases the risk of SCC.

Other risk factors include:

Squamous cell carcinoma is usually diagnosed by visually examining the lump on the skin before taking a small sample (biopsy) of the lump to be studied under a microscope. When looking at the skin, you GP may use a special magnifying glass known as a “dermatoscope” to get a closer look.

Biopsies are required to study the cell types in the lump and confirm the diagnosis of SCC. The GP may need to cut out the whole lump – a procedure called an excisional biopsy. This is done under local anaesthetic.

Further tests are not usually required, although a GP may want to order further blood tests and X-rays, CT or MRI to assess whether the squamous cell carcinoma has spread to other parts of the body.

Referral to a specialist

The vast majority of SCC cases can be successfully treated by removing the tumour using surgery. For larger SCCs, SCCs on the face, and SCCs that have invaded underlying structures or spread to other parts of the body, more complicated surgery may be required. As with all surgical procedures, there is a risk of bleeding.

Non-surgical treatments such as radiotherapy, phototherapy or chemotherapy are sometimes used as alternatives to surgery.

Small BCCs can be surgically removed by a GP in primary care. The procedure is usually done with local anaesthetic, where the skin is numbed beforehand. After the surgery, the incision is usually closed with a few stiches.

This is a surgical procedure that uses a tool called a curette to scrape away the tumour (curettage). Any wounds are sealed and bleeding is then stopped with small burns administered by a high-temperature electric probe (cautery). The procedure has been shown to be safe, and, for smaller SCCs, curettage and cautery cures 90% of cases.

Moh’s micrographic surgery is a surgical procedure for sometimes used for more aggressive SCCs that have the potential to invade surrounding body structures. It is also used to treat recurrent SCCs and SCCs on the face.

The procedure involves removing the SCC from the affected skin in stages. Once the SCC is first removed, the skin surrounding the excision wound is observed under a microscope to check whether any SCC remains. If some of the tumour is remaining, the procedure is repeated.

Although the procedure has an almost 100% success rate, Moh’s micrographic surgery is time-consuming, requires high surgical expertise and is not available at all hospitals. It is more often used for Basal cell Carcinomas (BCCs) than SCCs.

Cryotherapy or cryotherapy involves freezing the SCC tumour with liquid nitrogen. This destroys the cancer cells and the tumour eventually falls off. Cryotherapy may cause the surrounding skin to become red, swollen or blistered. This normally subsides within a few days. Cryotherapy is particularly effective in treating SCCs that are smaller and nearer the surface of the skin.

Photodynamic therapy is more suitable for smaller, well-defined SCCs. It is less effective for deeper SCCs and there is a higher risk of the SCC reappearing or spreading.

Radiotherapy uses a beam of targeted X-rays to destroy the cancerous cells. It may be considered as a treatment for people who are unsuitable for surgery. Depending on the size and extent of an SCC, a radiotherapy course may last between 2 and 4 weeks.

Radiotherapy has been shown to cure 90% of SCC cases, but the procedure carries a risk of scarring. The skin can also become red and inflamed after radiotherapy, but this usually settles down over time.

The same area cannot be treated twice with radiotherapy, so surgery may eventually be required for recurrent tumours.

Imiquimod is an immune-modulatory drug that triggers the immune system to attack abnormal cells. It is used to destroy the cells of an SCC. Imiquimod comes as a 5% cream, which is usually applied to the skin daily, for 5 days a week, over a period of 6 weeks.

Topical imiquimod is more suited for treating early and precancerous stages of SCC including Bowen’s disease and actinic keratosis. The drug may cause redness and soreness of the skin and flu-like symptoms. These generally subside with time.

5-fluorouracil is a drug known as an anti-metabolite. It is taken up by cancerous cells and then interferes with their ability to make and repair DNA, causing them to die. 5-fluorouracil comes as an ointment, which is rubbed onto the SCC affected skin, usually daily for 6 weeks. It is particularly useful for SCCs in their early or pre-cancerous stages and SCCs nearer the surface the skin.

Topical 5-fluorouracil commonly causes inflammation of the skin when it is applied. This generally settles down with time.

Measures to lower your exposure to harmful UV radiation will help to reduce your risk of developing a basal cell carcinoma. Where possible, try to: