Clueless: men have no idea about menopause symptoms

How much do men know about menopause? Not much, a new study reveals.

What do shoplifting and craziness have in common?

They’re symptoms of menopause, according to some men who took part in a study to find out just  how much men know about the topic.

The study found that in general men were clueless, with 70% of them unable to name more than one of the 34 recognised symptoms.

The study, by menopause brand Pelviva, asked 500 men aged between 45-54 – the average age range at which women start to exhibit symptoms and go through menopause- to name menopause symptoms. 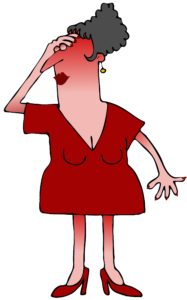 Given most men may have seen their mothers go through it, or in this age group may have partners, friends or sisters going through it, you’d think that perhaps ‘hot flushes’ and ‘mood swings’ might spring to mind.

But, no – the closest some got was confusing hot flushes with heat stroke.

More bizarre were answers such as ‘shoplifting’ and ‘craziness’.

In what can only described as an understatement, the authors wrote politely: “Their answers, or lack of them, were disappointing”.

With so many symptoms to contend with, the menopause is no joke, but Pelviva believe the findings show we still have a very long way to go to break down the barriers and make menopause an acceptable topic for discussion.

“It’s taboos around discussing these issues that can make the experience ten times worse for sufferers,” they wrote.

Menopause doctor, Dr Shahzadi Harper from the Harper Clinic in London agrees and says it’s important to talk to our partners as they can play a vital role in helping women through this sometimes difficult period.

‘Speaking with a partner should be first port of call, still many women feel gagged by feelings of embarrassment.” 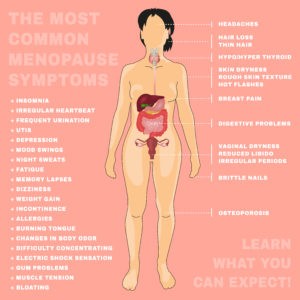 Some menopause symptoms can be quite debilitating. They can include depression, low mood and low libido, panic attacks and anxiety as well as insomnia.

They can also be physical including the well know hot flushes and night sweats, but also heart palpitations, stress incontinence and vaginal dryness and pain during sex.

These latter ones can be difficult for many women to talk about and can have a significant effect on their quality of life, confidence and their relationships.

Brain fog, difficulty concentrating and odd things like a burning tongue, electric shock sensations and changes in body odour are others that can affect daily life.

But there is help at hand.

“On the face of it, menopause needn’t be a miserable time though,” Dr Harper says.  “Every day, life-changing new products are being developed. Unfortunately, it’s popular opinion that needs attention.”

HRT or hormone replacement therapy is recommended by NICE guidelines as the first line course of action for many women as it can help with many of the symptoms.

Vaginal creams and gels can help with the symptoms of vaginal atrophy as can treatments such as Femilift, a laser based treatment that can help regenerate vaginal tissue and the mucosa. The result is improved lubrication and less urinary leakage.

Dr Harper says, “Of all the menopausal symptoms, urinary incontinence is possibly the biggest taboo of all. I want to change this! If we broaden discussion and make women aware that Pelviva exists we can make a positive difference to women’s health and wellbeing.”

Pelviva is a pioneering device for women struggling with stress incontinence and pelvic floor exercises, she says.

There is more to pelvic floor exercises than simply clenching or holding stainless steel balls in place (please don’t use jade, it’s porous and increases the risk of infection.)

Pelviva is an insertable, single use device that sends electrical signals to fire the muscles in the pelvic floor so they start to strengthen. 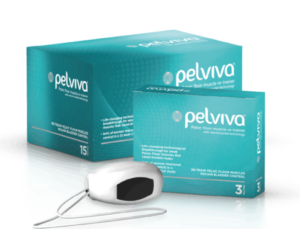 In the UK, 2 in 3 women over the age of 40 experience urinary incontinence. It’s a condition that can leave them feeling debilitated, embarrassed and unable to engage in day-to-day activities. Pregnancy and childbirth are also factors that contribute to a weaker pelvic floor.

Featured Stories
Maskne – how to prevent acne from wearing a mask
What to do when your GP says ‘No’ to HRT
The M Diet by Dietitian Nigel Denby
Erectile Dysfunction: causes and treatment options
Can diet help relieve your menopause symptoms
Acne scars: which treatments can help
Retinol Rules: How to use retinol products properly- Dr Tympanidis explains
Dark circles and Puffy Eyes: Your guide to causes and treatments
Menopause and Mental Health – The Forgotten Symptoms
Rebranding HRT-is it time we changed the way we think about it?
Categories