Neostrata Problem Dry Skin Cream is a targeted treatment for:

Its 20% glycolic acid formulation works with its moisturising ingredients to exfoliate and smooth the skin. See results on heavily calloused skin in as little as 3 weeks with daily application.

Neostrata Problem Dry Skin Cream is a rich cream that is formulated with 20% Alpha Hydroxy Acid (AHA) and soothing emollients to smooth and moisturise severely dry, rough and thickened skin.

Produced by US dermatologists and clinical proven to work, you can expect to see significant improvement in even heavily calloused skin in as little as 3 weeks of once daily use. 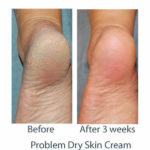 This is literally my holy grail in the winter months. My skin on my legs and arms used to be rough and dry during autumn and winter seasons, but ever since I discovered this product my skin is soft and beautiful! My feet too!

Reduce application to once daily or every other day on sensitive areas such as face, underarms, behind knees, bend of arms, and groin.

Test skin tolerance on a small inconspicuous area of the body prior to using on sensitive skin or on children.

Daily use of sunscreen or sun avoidance is recommended with use of this AHA product and for one week after to minimize the risk of sun sensitivity/sunburn.

Dr. Van Scott established the Dermatology Branch for the National Cancer Institute and served as its Chief for over 15 years before joining Temple University Skin and Cancer Hospital.  He has received numerous prestigious awards, including the Lasker Award, for outstanding research achievements in skin cancer.  He has been named to the list of ‘Masters in Dermatology’ by the American Academy of Dermatology, and received the Distinguished Service Medallion for his leadership and service to Dermatology.  Dr. Yu, a well known dermatopharmacologist, was an Associate Professor at The Temple University Skin and Cancer Hospital where he conducted extensive dermatological research.

When the doctors began working together in 1966 at Temple University in Philadelphia, they shared a mutual interest in diseases of the skin.  Since over fifty percent of all skin problems are due to difficulties in shedding and forming the stratum corneum, the doctors were determined to find ways to positively influence the formation of new layers of the skin.  This partnership has spanned four decades and still continues today.  While their early research focused on treatments for psoriasis and skin cancers, they soon broadened their focus to include numerous diseases of the skin, especially those affecting the epidermis.  Their early work led to important discoveries for treatments of dry skin, ichthyosis, psoriasis, acne and other conditions involving disturbed keratinisation.

During a study to evaluate natural, physiologic type substances and their effects on patients with ichthyosis, Drs. Van Scott and Uy discovered that this class of compounds has a profound effect on the development, maturation and turnover of both normal and diseased epidermal skin.  When ichthyosis patients returned with normal skin where these compounds were applied, the doctors were elated.  They named these compounds alpha-hydroxyacids (AHAs) based on their structure and filed for their first patent (US Patent No. 3.879.537), entitled Treatment of Ichthyosiform Dermatoses, dated April 22nd 1975.

Resulting from this early work was the first AHA prescription topical called Lac-Hydrin.  Lac-Hydrin was licensed to and marketed by Westwood (a division of Bristol-Myers Squibb), and was the best selling prescription treatment for dry skin for over 10 years.  Now that the doctors’ “dry skin” patents have expired, many skin care companies market products for dry skin containing one or more AHAs such as glycolic acid and lactic acid.

The next breakthrough came in the mid-1980’s, during a study of the interaction of AHAs with bio-active compounds, when applied in combination to the skin. Drs Yu and Van Scott discovered that the AHAs have the ability to affect fundamental changes in the dermis when used for prolonged periods of time.  While their first discoveries relating to the use of AHA’s were therapeutic in nature, this later discovery caused a revolution in anti-ageing skin care.  Their continuing research and clinical experience has revealed that AHAs are not only in the treatment of dermatological conditions, encouraging cell turnover, but also effective in stimulating older damaged skin to rejuvenate itself.

In 1998, the doctors founded NeoStrata Company, Inc. to commercialise their research and development accomplishments.  NeoStrata Company, located in Princeton, NJ, continues their research and develops and markets clinically-proven dermatologist developed skin care brands including NeoStrata, Exuviance. CoverBlend, and NeoStrata Therapeutics.  These therapeutic and cosmetic dermatological products feature unsurpassed Polyhydroxy Acid technology to meet the needs of every skin type.  NeoStrata and Exuviance products are sold in over 75 countries worldwide.

Avon’s Anew in the early 1990s was the first cosmetic skincare products to license the anti-ageing benefits of AHAs. Drs Van Scott and Yu have licensed their inventions over the years to several companies including Bristol-Myers Squibb (Westwood Division), Avon, Chesebrough Ponds, L’Oreal, Medecis, Pfizer, Aventis, and many others.

Their subsequent work has broadened the classification of Hydroxyacids to include Polyhydroxy acids, such as Gluconolactone, and complex Polyhydroxy Bionic Acids, including Lactobionic Acid and Maltobionic Acid.  Both classes provide anti-ageing benefits and normalisation of keratinisation similar to traditional AHAs, but also provide additional benefits such as enhanced moisturisation, anti-oxidant effects, and suitability for use on sensitive skin.  These ingredients and their benefits have been licensed to companies including Estee Lauder. Pfizer and Dermik/Aventis.

In later years, Dr Van Scott entered private practice, while Dr Yu studied Oriental medicine.  While their careers have taken them down different paths, their collaboration continues today.  The doctors have more than 110 patents, Dr Yu has published over 50 papers and Dr. Van Scott has published close to 200.  They continue to work together to find treatment for skin diseases and are now mainly focused on treating psoriasis.  Drs Van Scott and Yu were awarded the 2010 Discovery Award by the Dermatology Foundation for their research discoveries and impact on the treatment of skin disease.

Drs. Eugene Van Scott and Ruey Yu are co-inventors, with more than 100 U.S. and foreign patents and are authors of numerous journal articles.  They wrote the chapter in the definitive textbook for the field of cosmetic dermatology. “Alpha Hydroxy Acids, PolyHydroxy Acids, Aldobionic Acids and their Topical Applications in the Textbook of Cosmetic Dermatology.

Received both Japanese and Chinese education

If you place your order before 3pm Monday to Friday, we’ll aim to get it to you within 3-5 working days – Royal Mail/delivery service permitting.

Your delivery will be tracked and you will need to sign for your delivery, so please make sure you are home.

Note: Due to the Coronavirus these products will be shipped directly from the distributor to help ensure your safety.

Overseas Deliveries overseas will also be sent by tracked mail and may be subject to a higher cost depending on weight. You may be asked to pay import duties in your country of residence.